How to bake without baking soda or baking powder, plus Gluten free Apple Cinnamon Coconut Muffins 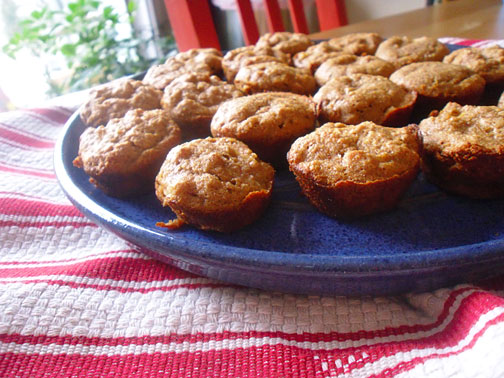 I have always used baking soda and baking powder in baking.  After I suspected corn was bothering me, I started making my own baking powder with arrowroot powder instead of cornstarch.  Here is the recipe I was using:

Mix well and store in an airtight container

However I never really thought that the actual baking soda may also be a problem for me until I came to the GAPS diet.  According to Dr. Natasha Campbell-McBride, baking soda shouldn’t be eaten by people following GAPS because most people with digestive issues have low stomach acid.  Baking soda is very alkaline, and therefore decreases one’s stomach acid even further.

I have been a little slow to accept this fact completely but do follow it most of the time.  I did use baking soda in the cake I made for the birthday party.  But for the most part have tried to find other ways to create leavening in my baked goods.

While I was creating the Just Desserts for Limited Diets recipe book, I created most of the cakes free of baking soda or baking powder by using egg whites as leavening.  This worked extremely well and I am continuing to use this method to create moist and springy baked goods without baking soda.

It is very simple but it does take more time and equipment.  But the results are worth the extra step I assure you.

How to bake free of baking soda or baking powder:

After combining all the other ingredients together in the other mixing bowl, add the egg whites and stir them in until well mixed.  Do not over mix; just stir until combined.

Follow the rest of the recipe as is and bake according to directions.  The baking time may vary; just keep an eye on the baked good and bake for longer if needed.

As far as baking egg-free without baking soda or powder, this is a lot more tricky.  I have done it but the results are not as good as with the egg whites.  I am hoping to find a way to leaven even egg-free, gluten free and baking soda free baked goods.  Let me know if you have ideas!

I made these yummy muffins with my son who said “apple” when I asked what kind of muffins we should make.  I added the cinnamon and they turned out almost too yummy.  (I can’t stop eating them)

2.  Separate the eggs and place the egg whites in an electric mixing bowl (or use a hand held mixer and a mixing bowl).  In another mixing bowl combine the egg yolks, coconut oil, honey and salt together. Add the coconut flour and cinnamon and whisk into batter until smooth.  Add the apples and stir until well combined.

3.  Beat the egg whites in the mixer until they become stiff and form soft peaks.  Add the egg whites to the rest of the muffin batter and stir just until combined.  Fill prepared muffin cups half-way with batter.  Bake in preheated oven for 15 minutes for mini muffins and probably 20 or more minutes for full size muffins. 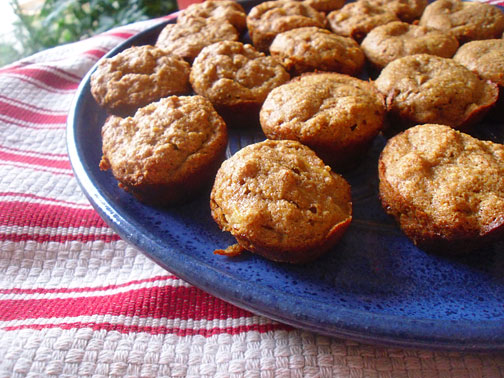