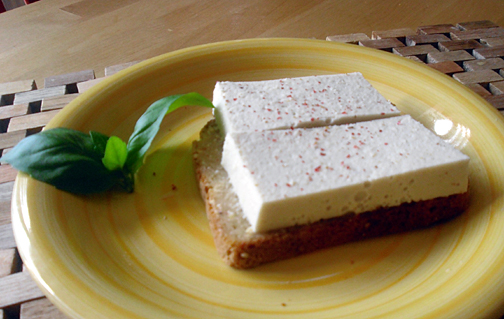 I found this recipe for sliceable dairy-free cheese a while back on a forum and finally made it the other day.  It seemed like every time I looked at it, it just seemed too complicated but I think that was just a first impression.  It is actually very simple and tastes pretty darn good. It is soft but still sliceable and resembles a white, mild cheese like Montery Jack.

The great thing about it is it is free of casein (milk protein), which many of the commercial dairy-free cheeses contain.  The only cheese I have found that is actually free of casein is from Galaxy Foods.

It does contain cashews, so it won’t work for people who are nut-free.  And there are a few changes I would make based on my first experiment with it.  It seems as though I can never follow a recipe exactly so I also made some changes as I made it.  I’ll add these changes below in the recipe.

I made chicken burritos the night I made the cheese and it was really great on them!  It really added some nice creaminess and cheesiness to the burritos!

I haven’t tried this yet but the recipe says you can freeze the cheese and then shred it for pizza cheese.

Another tip from the recipe is for making the cheese to resemble American or cheddar cheese:  blend in 1/4 cup pimentos and 1 tsp paprika to the recipe. (see tips below)

3/8 cup emes kosher gel (I used regular gelatin because this is what I had.  I only had 3 1/2 packs which was only a little more than an 1/8 cup – I still firmed up nicely but is still pretty soft.  I would like to try agar agar next time because I prefer this to gelatin)

2 Tbs. Lemon juice ( could use a hint more, you could also try balsamic vinegar if you don’t have lemon juice)

2 Tbs. nutritional yeast flakes (I would add at least 1 more Tbsp next time, maybe 2 because I would like a bit more cheesy flavor)

Steps:
1. Place all ingredients in the blender except the 1 cup cold water. Turn on and blend for 1 or 2 minutes until very smooth.

Hint: Place a towel over the lid of the blender before turning on. Hot liquids tend to splash out.

2. Add 1 cup cold water, blend briefly and pour into containers of your choice to chill and slice when firm.

Hint: This recipe makes a white cheese resembling Jack cheese. If you want half of it to resemble American cheese in color, pour half of it into a 1 pint mold and blend in ¼ cup pimientos and 1 tsp. paprika to the remainder. This can be frozen, so you might want to make a double recipe and keep it handy for future use, Frozen Cashew Cheese shreds very nicely if you do it while still frozen, and makes a great topping for Pizza. To thaw, set out at room temperature for an hour. Don’t try to thaw it in the microwave–it will melt and not be sliceable.

Prep time: 15 min Chill time: 4 hr or overnight. (It only took ours about an hour to be ready to be eaten with our burritos.)

I would love to hear if you make this and your thoughts about it.  I am going to freeze part of my batch and see how it grates.  I think this is what I am most excited about!