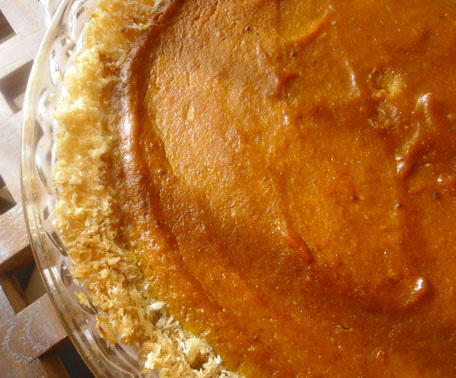 Pumpkin Pie is the only pie that I can say that I have always loved, especially for the holidays.  For me, I think it’s because I am just not a fan of the “flaky pie crust” that most pies are made with.  However, I am starting to love pies now that I have found some great gluten and grain free crust recipes.  I love the texture of the nut crusts much better than regular pastry dough.  So, I am beginning to love all kinds of pies – pecan and apple are my two new favorites!

I created this pie for the Thanksgiving Menu Planner for people with limited diets and I made it with a coconut crust because I wanted a nut-free as well as gluten and grain-free option for people.

When I first tried the pie before it was completely cool, I liked it but the crust seemed a bit soft.  But when I put it in the fridge overnight and tried it the next day, the crust had set up and it was great.  I really loved it and I want to make another one before Thanksgiving.

So, with Thanksgiving right around the corner and with so many people being limited in what they can eat, I wanted to post a pie recipe that almost anyone can eat.  This pumpkin pie does contain eggs, which I know is a problem for many.  However, if you’re looking for an egg free pumpkin pie, check out this one.  The trade off is that it uses almonds to keep it together in place of the eggs.  But if you can’t eat eggs and can eat almonds, this would be a great recipe for you!

It’s been a busy week so I will leave you with the recipe:

Steps:
1.  Line a 9 inch pie pan with your choice of gluten-free crust.  Crack the eggs into a large bowl and beat well.  Add the rest of the ingredients until thoroughly combined.  Pour batter into pie crust.

2.  To avoid the crust getting burned, cover edges of pie pan with strips of aluminum foil until they just over the edges of the pie crust.

Steps:
1.  Mix the coconut with the butter or oil in a small bowl.  Transfer to a buttered or oiled 9-inch pie pan and press firmly and evenly against the bottom and sides.

2.  For pumpkin or pecan pie, add the filling and then bake according to recipe directions.  This pie crust can also be baked by itself for 30 minutes at 300 degrees and then used with filling that doesn’t need to be baked, such as a Coconut Cream Pie.