Making sauerkraut and other adventures 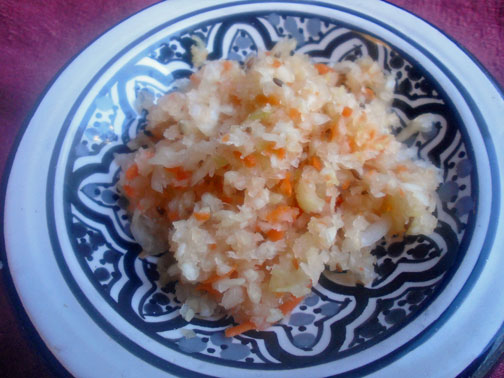 I have to admit I have never liked sauerkraut.  I don’t even like looking at it most of the time, much less smelling it!  My husband’s family serves it every year at Thanksgiving after they’ve cooked it for hours in a crock pot.  It is very brown and limp looking and I simply can’t stand the smell.

I don’t think I ever ate it as a child, but remember trying it at some point and just not liking it.  So I guess you can say that my faint memories combined with my present reality during Thanksgiving has put a damper on trying to make my own lacto-fermented sauerkraut.

One thing I knew before I decided to give it a go is it would be different from my inlaw’s version because you don’t cook it.  And after continued praise of this culinary concoction from countless resources, I have finally given into giving it a try.

However, I have to say I wasn’t thrilled about making it.  I love cooking.  After I cook for my clients, I go home and create more things for my family to eat and enjoy.  I have always loved this simple act of creating a nourishing meal and then sharing it with company.

But I did not enjoy chopping and shredding and mashing and pounding and pounding…did I say pounding? my BIG head of cabbage.  I don’t even like cabbage!  I don’t think it smells very good and I happened to buy a very large head, for God knows why!

But here I was with the head of cabbage, sweating it out with my humble food processor and my meat mallet.  I ended up taking Debbie’s advice and running it through the food processor once shredded and this did help with releasing more juices and giving my arm a much needed break.

You’d think that pounding a cabbage for 10 minutes after you have been trained to hold a 30 pound toddler for the same amount of time wouldn’t be such a big deal.  But I guess it uses different muscles.  Maybe if I had been angry, this would have been a gratifying procedure.  But on the contrary, I didn’t enjoy it very much.

Now if I haven’t sold you on making your sauerkraut yet, I’m very sorry, but I am being very honest about my experience.

But I have some good news!  Hey, I was even surprised when I decided to check on my 2 and a half quart containers (yes it made a lot so I can enjoy it for a long time!) this evening and was actually quite surprised.

I tried the juice, as is recommended in the GAPS guide book, when you’re introducing fermented veggies.  And I have to say, I liked it.  It tasted of caraway, since I added some caraway seeds to the mix.  It was also tangy, telling me it was on its way to fermentation.  It also wasn’t too salty.  I liked it!

I decided to give it at least one more day on the shelf, giving it a total of five days as is recommended.  But I am just happy to know that I like it and it’s not going to be a chore to eat it!

Also, the sauerkraut is a bit orange because I added two grated carrots to the mix.

Update: I wrote most of this post before my sauerkraut was completed.  I went ahead and gave it another day on the counter and then transferred it to the fridge.  We have been enjoying it, but today when I looked at it (three days after putting in the fridge) I see that the top of the kraut is getting a bit dried out.  There just isn’t as much liquid in it as before.  Does anyone have an explanation for this?  There wasn’t a great amount of liquid in it to begin with because I didn’t use whey – just salt, a lot of pounding force and a little salt water.  Any suggestions for this? 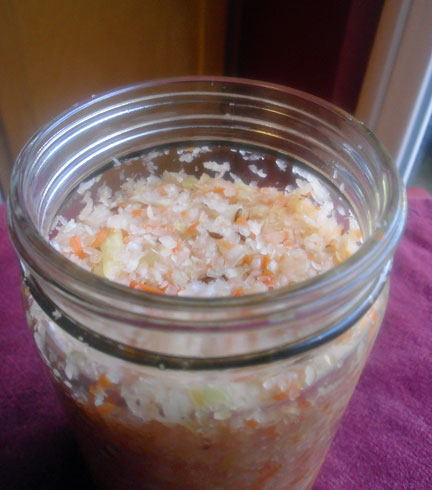 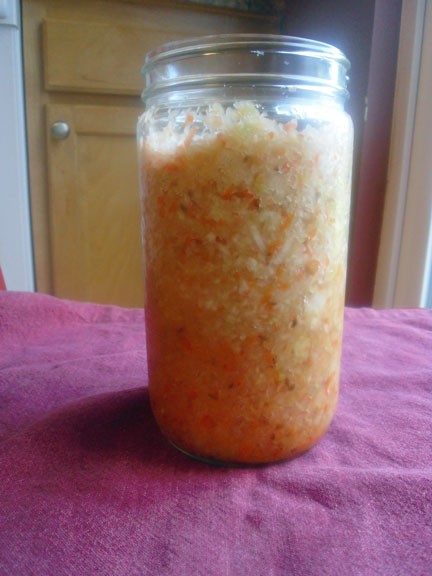 you can see it has more liquid down below

Kombucha making:
On another note, my husband and I finally got back to making our Kombucha the past couple of weeks.  We had started making it this past spring and then I think he got tired of doing it.  I had never really learned how to do it because I was letting him handle it.  So, our big mushrooms stayed in the fridge for a couple of months (at least) before I decided I really wanted some homemade Kombucha again.  We have already gone through our first batch and waiting on our second.  I hope to get at least two gallons going at the same time so that we always have some to drink.  It took me a little while to get used to it, but now I love it!

A simple and yummy meal from our garden:

Some other adventures of the week included making a garden frittata, grain-free almond crackers and another grain-free and gluten-free pizza crust made from almond flour.  The Garden Frittata was made with veggies from our garden, with fresh tomatoes, basil and red malabar spinach.  I also added onions to the mix and the result was a yummy creation.  Elijah loved it! 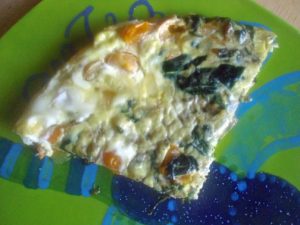 The almond crackers were a bit of an experiment, but I made them twice and they turned out better the second time.  They are actually quite delicious and buttery tasting.  I got the recipe from The Gut and Psychology Syndrome in the recipes section for egg-free baking.

The main thing I learned with the crackers is rolling them thin enough.  The first time I didn’t make them thin enough and they turned out more like thin flat bread, which I liked but were not like crackers.  The second time I made them, I rolled them much thinner and they were much better.  However, they were pretty brittle and about a third of them broke while taking them out of the pan.  I will share more about this recipe in another blog post. 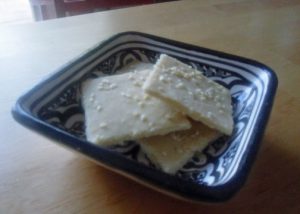 I loved this pizza so much I made it again toward the end of the week.  I used pizza sauce (not home made this time) mushrooms and almond cheese.  I made the crust with blanched almond flour but I would like to try hazelnut flour next time.  It was yummy, but my husband has confessed that he misses yeasty pizza dough.  Sigh! 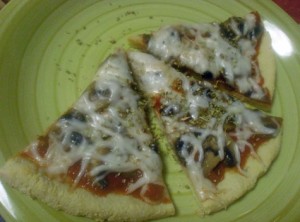 On Sunday, I started pulling some weeds out of the garden and then realized they were the remains of our potato plants.  Then I saw some fingerling potatoes swimming in the dirt and got excited.  We had already harvested some of our potatoes but we knew there were still some hiding in the soil.  So I started digging with a shovel with Elijah by my side and we started finding more and more potatoes – fingerling and blue.  I felt like I was on a scavenger hunt or discovering buried treasures.  With the plants long gone, we just had to keep digging and looking for them, not really knowing where they would be.  It was so fun! 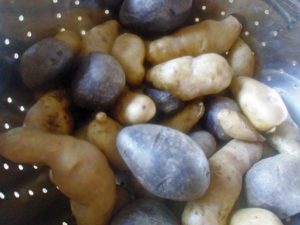 Blue and Fingerling potatoes from the garden

So, that is my week.  Busy, busy.  I wish I had more time to blog;  there are a ton of things I want to share including recipes, but I only have so much time with everything else.  Would love to hear any comments about the sauerkraut or anything else that catches your eye!

very LATE, my original intent for this post was for Wardeh’s Tuesday Twister.  Well, it’s Friday.  But I say, better late, than never!

Filed Under: Nutrition and Food